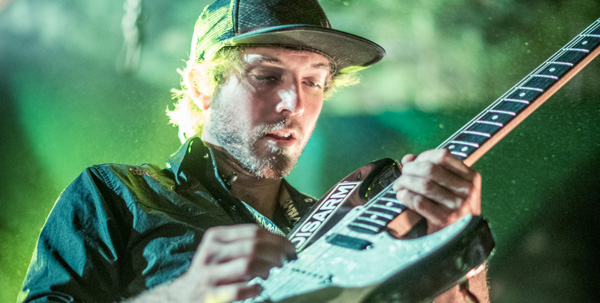 Straight from the wild woods of rural British Columbia, Moontricks blends the mountain folklore of roots, blues, and bluegrass with the urban witchcraft of livermilking bass and patina polished production. Drawing on diverse influences from Dr. Dre to Muddy Waters they create a shape­shifting, chameleon style all their own that has won over audiences from dive bars to dancehalls. NOG, who cut his teeth as a producer and DJ in Vancouver, brings his hip­hop background and minimalist, backwoods bass to the group while adding the unique sounds of his rippin’ blues harmonica. His partner in musical mischief, Sean Rodman, draws on his career as a folk artist and songwriter to meld smooth, soul guitar riffs with high­ energy banjo picking. Together they have played sold out shows across B.C. and Alberta including three performances at Shambhala Music Festival. They push and combine the boundaries of live and electronic music and they aim to bring their patented Moontrickery to audiences across the globe, making people groove to music they never previously imagined.

Smoothie. With a career spanning over 15 years, Smoothie has become one of the most
versatile DJ’s in the scene. Known for being one of the very first to
spin tracks and play sax at the same time, he has locked down a reputation
as a one-of-a-kind performer who knows how to rock a dancefloor!

When he’s not behind the decks, Smoothie tours with Westcoast superstars
The Funk Hunters, adding his super-powered saxophone to their world famous
2 DJ, 4-turntable, audio/visual experience!