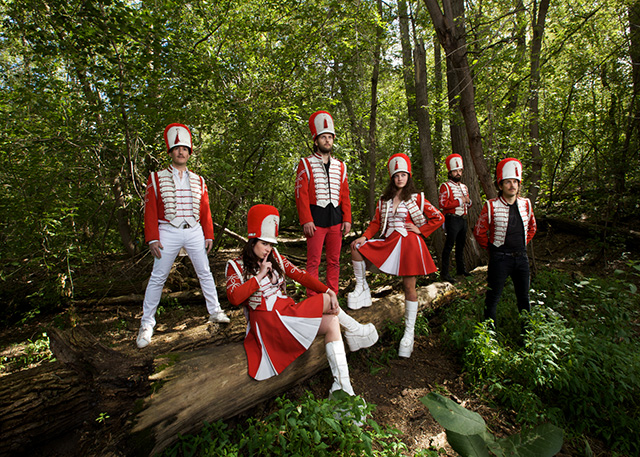 The Wet Secrets are a six-piece rock ‘n roll gang fueled by a primal, fuzzy punk rock spirit, and steered by a love of slinky disco, art rock, 70’s horns and AM gold songwriting. They have a well-established reputation for a phenomenal, sweaty live show. NPR included The Wet Secrets in their “Austin 100″ list of top artists to watch at SXSW 2016, exclaiming: “Fist-pumping pop-rock fight songs, from a bunch of Canadians dressed like a marching band.

Yes!” NPR also included the current single “I Can Swing a Hammer” on their Heavy Rotation list of “10 Songs Public Radio Can’t Stop Playing” describing the band as “a colorful, energetic sextet that mines the spirit of ’50s rock ‘n’ roll and ’70s punk and runs it all through a 21st-century filter.” The Wet Secrets recently released a new 4-song EP, “I Can Live Forever” on Six Shooter Records, with a full-length album “The Tyranny of Objects” to follow this year.

Most recently, they opened for The Black Angels at the Fillmore Charlotte in North Carolina, then played SXSW 2016, Los Angeles, San Francisco and Seattle.