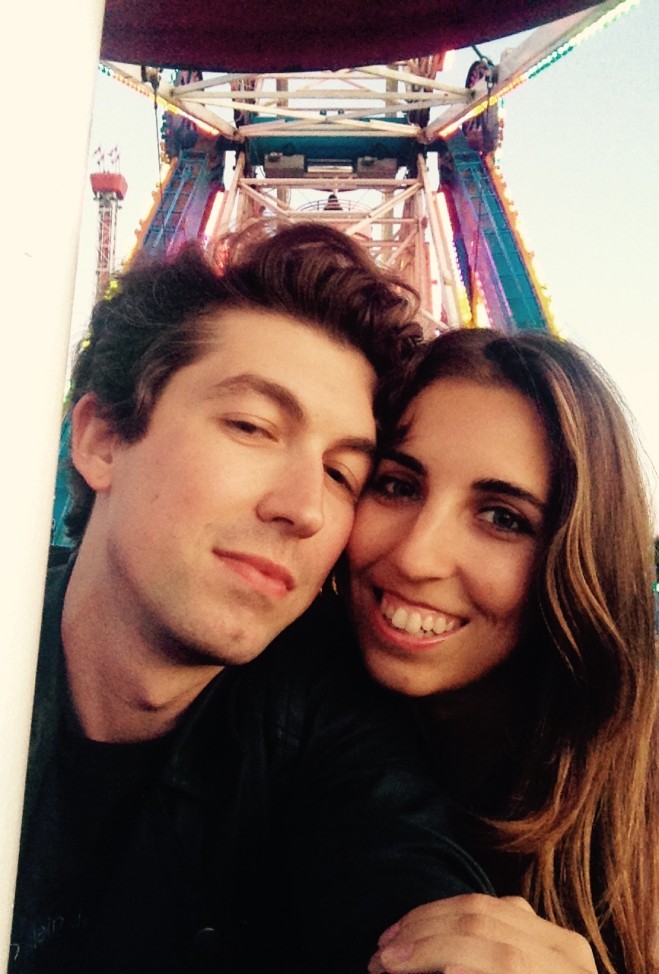 It’s a Ponderosa LOVE STORY! Read up on how Louis from Gay Nineties and Nash from FRANKIE fell in love for reals at Ponderosa 2014.

My band FRANKIE had just finished our set wearing horrendously cool tie-dye dresses and were now rocking out in the audience to The Gay Nineties who played away the sunset. I was dancing in front of their babe stand-in bass player the whole set not realizing how important he would be to me one day.

Later that night I was getting groovy dancing to Ladyhawk when suddenly a dude in a bear costume got on stage. So I turned to the guy next to me and said “WTF! There’s a bear on stage!” The guy next to me ended up being Louis, the babe stand-in bass player from earlier. We talked for a while about how awesome Ladyhawk was, and then decided to watch a few more sets together. It was at the Braids set that I realized I was really enjoying hanging out with this guy. I think I had never felt so relaxed around someone my whole life.

Hanging out in the artist area after, I was running around in a split open parka shedding feathers everywhere pretending I was in a space suit. I told him we had to go to the moon one day. A few weeks went by and I eventually wrote a song about it and posted it on the internet. He heard it, and luckily thought it was cool and not ultra dorky.

Now we’ve been together for almost two years and he’s not only my guy, but also my best pal. I didn’t think I’d ever find such a babely mega-rockstar babe, and that he would think I was one too. Awwwwwww!

Thank you to Ponderosa for putting on such a amazing event each year. It’s the good vibes that makes the magic happen.

Louis, I love you to the moon and back xo